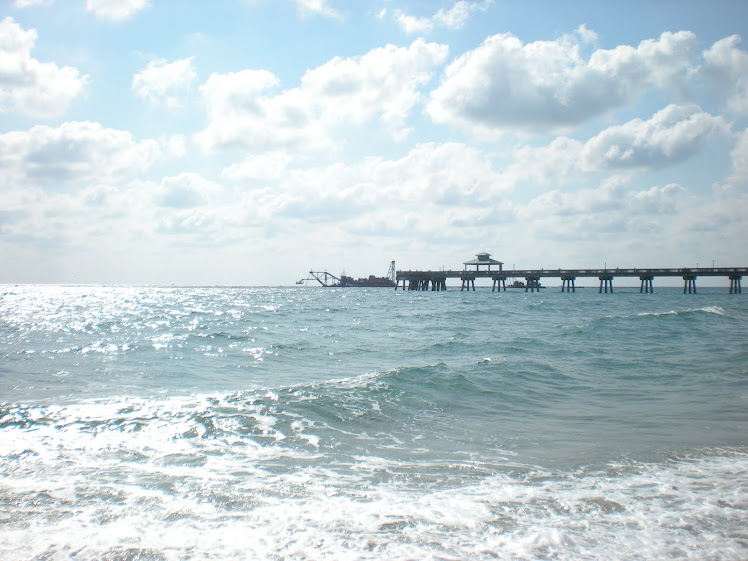 No Sand this is not you in dirt.  I am pretty sure. 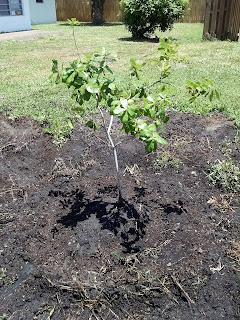 This is the first real tree I think I ever bought.

Back story.  My landlady was told by the local power company that the Black Oak 'Shade Tree' the city planted long time ago was going to probably snap the power lines to out homes after the first good hurricane that came along.  The city is NOT responsible for it.  So she asked me if I had any friends to cut it down.  I did.  Then she died.  Then the tree hugger who drives an oil sucking car that probably kills tons of people in the long run reported her.  So I gave in finally and bought a tree after I had another buddy take out the stump that was left.  And let's add in that the tree had taken out a portion of the irrigation system that had to be fixed first.  Many dollars later I bought the tree and had it planted.

This was not the first remodel of rental property I've done.  I am into gardening as many of you may know.  I've dug out a 1950's Japanese garden back in Reno along the Truckee River that stunned the owner's daughter (she'd inherited it after her dad passed and cried when she saw it).  Back in Detroit I dug out a yard of spare bits and such and made a garden that was brick lines and had a tilted PVC pipe underground watering system. And then my years with my folks digging in the dirt.

Here hasn't been straight forward due to the crazy ass weather but I am making my way through it all.

I hope your garden grow and illuminate the world.
Posted by Lydia Manx at 6:20 PM No comments: 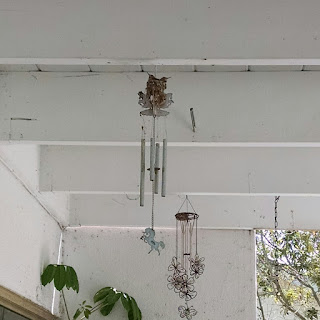 Yes those are hummingbirds at the top of the wind chime.  For whatever reason I have found that in California and Arizona that seems to be a very popular spot for hummingbird nests.  Fun to watch.

Been a brutal year but I am still kicking.  Heat and thunderstorms make up most of the days at this point.  I've not done enough writing but there have been tons of things keeping me crazy busy.

I hope you are all having a good summer.
Posted by Lydia Manx at 8:50 AM No comments:

What a long year already 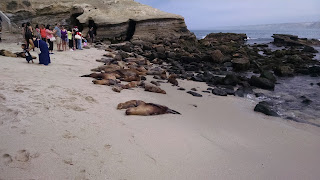 One of the side trips my Dad and I took was to La Jolla Cove along the coast where the seals are taking over the beaches.  My aunt and uncle joined us.  I was the only one who ventured down onto the beach due to the various 'conditions'.  First Dad dropped us off to go find a parking space (rarity along the coast even in the middle of the day) - since he'd turned his ankle naturally he drove and hobbled.  Once out of the car the lovely aroma of ode to marine life wafted up and tried to suffocate each of us quickly.  The Cove is a protected environment for marine life.  And after a lengthy legal battle the seals that whelp along the edge of this once lovely spot are not considered nuisances but special.

It must be noted at first they were only closing the 'Children's Pool' built decades ago to keep a small area safe for children to swim and avoid being shark dinner (by mistake) but as time and tempers flew the section of shore gave way to many more seals.  For a long time the lifeguards would put up barriers and ticket anyone near the creatures but from my observation that has gone away.  I actually watched while tourists backed up nearly with their tushes in the face of momma seals protecting their little ones while snapping selfies and group shots.

The other reason nobody ventured onto the actual beach was the fact signs were posted saying the water is contaminated with possibly deadly bacteria as the ocean is pretty much the seals toilet and rarely fully flushes.  I snapped a few pictures and scrambled up the stairs when the tide rose and began to spatter those close to the toothy seals.  I did find myself advising the twit challenging her boyfriend to be the first to hug a seal with an offhanded comment of, "I don't think the tickets are that much as these are a protected species but the mother seals do tend to bite."  I had to...I mean really those seals don't need twit breath now do they?

We walked along the top of the beach and talked about the coastal changes.  The tide pools we used to walk along and glimpse small fish, sea life and other tide pool fun had been decimated by the seals.  I called the tide pools the seals dinner plates.  Not a sea slug much less a crab to be seen.  The mossy green slime was coated with well...shall we say smelly 'stuff'?

We did enjoy the walk once the wind blew the other direction.  My uncle felt obligated to say that the sharks weren't doing their jobs very well given the number of seals we saw.  The sharks were taking bites out of sea life just not the seals but silly surfers.

It was one of the nice breaks in my time out in California.  So many of the days were spent dealing with loss and death.  Circle of life sucks some times.  But like the tree below from the park we make adjustments and continue on upwards. 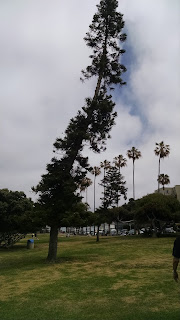 It took less than a week.  My mother died.  I am flying home to help and will be out there for nearly three weeks.  No promises on the blog much less writing but who knows.

Love those you are with and tell them.  I am at peace with that since every time I spoke with my folks I told them that I loved them.  They didn't reply in kind for years (it wasn't in their own histories) but in the past three years I heard those words from both my parents once a week at the very least.
Posted by Lydia Manx at 6:45 PM No comments: 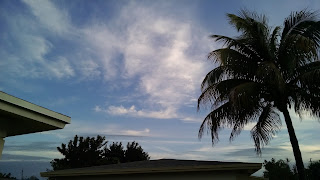 It's spring now so the morning temperatures are in low 70s and highs mid 80s.  Too bad that will change in weeks if not sooner.  Spring seems to get skipped in these parts.  I have worked on the yard lately.  Trimming up trees and bushes while working on ridding the lawn from nasty weeds. 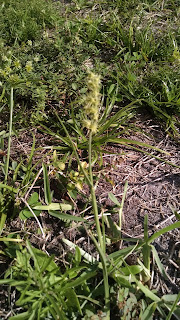 Nastiest above.  Those things jump and stick with a vengeance. 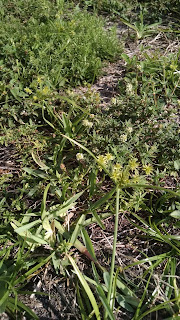 This one above not as nasty but still evil.

That said these can't be simply pulled out or mowed down but have to go see specialists to get the correct treatment.  Sigh.  Since I put the stuff down not a drop of rain so I will be forced to run my sprinklers tonight.  So much fun * not *

Hope you all have a great week.

Posted by Lydia Manx at 4:50 PM No comments: 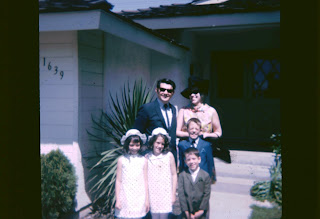 Thanks Facebook.  I wouldn't have known such a day existed.  Yeah, That's how I find things out.  FaceyWacey book!

Us as kids decades ago.  Easter this time of year.  Suits and matching dresses and hats for me and my sister.

Great weather this weekend.  I didn't write enough but had a great time with friends and got in yard work.  I am a geek that way.

Not too much more.  Just in the holding pattern.
Posted by Lydia Manx at 5:15 PM No comments:

Days of wine and roses 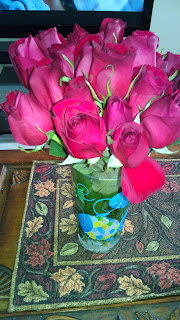 My friend's boyfriend dropped me off two dozen roses the other night.  He brought home two dozen to her also.  I still don't know why but hey here they are. And I am sipping wine.

One month left at job then I have a slight cushion while finding new one.  Scary but cool because I know I will get some writing in with the hiatus.  April was always the writers prompt from some NaNoWriMo friends to write with goals self-proclaimed in a group.  It was online with T-Shirts, mugs and other bling available declaring our Foolishness.

Hope you all savor your week and enjoy your weekends.